Sorry it’s taken me so long to post—Saturday and Sunday of this week were a bit crazy, and I’ve finally just started to feel like we’re settled in here in Lucerne.
Sunday was another adventure at Henley. It started off with a bit of a bang-up during our paddle in the “Tall Quad” (rhymes with “awkward”) in the morning. I didn’t realize that motorboats were allowed to double-park inside the booms, and took off half my rigger during our trip down. Thankfully, aside from my rigger, the rest of the equipment was fine, and everyone was fine as well. After we got in from the row, I found out that unfortunately my teammate Erin Cafaro wasn’t going to be able to race that day. Thankfully, she’s doing much better, and is back in the 8+ for our racing this week in Lucerne.
I headed down to the course ready for a day of racing and resting. We launched the eight and had a solid warm-up down to the start. After making sure we were aligned and both sitting ready, the official in the launch started us, and we were off! Our race was solid, if not quite as fast out of the blocks as the boat’s race Friday. We pushed towards the end, including a big move where we all pulled for Cafaro. We ended up tying the course record that the eight had set on Friday, which was really exciting to find out afterwards. The British national team definitely pushed us, and I’m sure there will be some good hard US-GB racing here in Lucerne.
After our race, I felt like a crappy boatmate, but I was told to go recover and rest while the rest of the boat derigged and prepped the eight for travel to Lucerne. Luckily, the showers at Henley are freezing, and I had packed plenty of snacks, recovery drinks, and water, so I was good to go. About 40 minutes after I finished my cooldown from the 8+ race, my 4x teammates arrived to start warming up for our Princess Grace final! So, it was back to work.
We launched and had a much less eventful row up to the start than our paddle that morning (thankfully!) We were early to the start, and were hanging out waiting to pull into the starting blocks when we started being heckled by some tipsy teenagers on the bank. “Where are you from?” I pulled on my uni so they could see the “USA” down the side. “Oh, USA, huh? Well…row this one for Sarah Palin! I mean, for KFC!” Luckily, before they got to Walmart, it was time to row it up to the start.
We had a really solid start, and as we lengthened down, we discovered we were in the middle of the best piece we’d had together as a boat. We executed our race plan and were able to push out, bit by bit, to a little bit of open water. It was really exciting to have our best piece be the final—it’s great to have awesome teammates who thrive under pressure, too!
We only had a few minutes after the race to meet and be excited about the great race we’d had, because then it was off to get dressed in twenty minutes to get to the Steward’s Enclosure for the awards ceremony! We managed to get in a shower, throw on our dresses and hats, and powerwalk over just in time (there is no running at Henley!) Being in the medal stands were a great experience. I got to catch up briefly with J.P. Hogan, who won in the Harvard 4+, and with whom I’ve trained over breaks at the Newport Aquatic Center for the past few years. 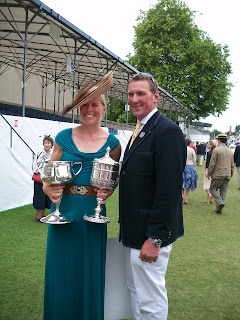 Sir Matthew Pinsent was also our trophy-tender (you don’t leave with the Cup, you leave with a picture of the Cup!) and it was such an honor to meet him. After teasing our quad when we asked for a boat picture with him—“Ah, yes, the women’s quadruple sculls, the event for which I am best known”—he congratulated me and our team on our successes.
After all of the hoopla, I finally got to sit with a few teammates, friends, and parents, and have the obligatory Henley drink, a Pimms cup. Well, I didn’t entirely make it through the Pimms…turns out my stomach wasn’t up much for celebrating after all that racing. But I enjoyed the half a Pimms, and all of Sunday’s racing and Henley adventures, quite a bit. And I’m so proud of Team USA for our success throughout the racing. What a great first trip to Henley! 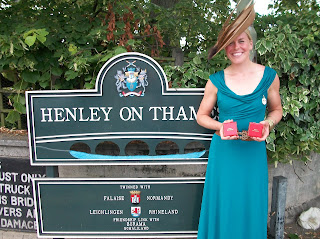