Fun Times in the One-Times:
How to Succeed in the 1x without Really Trying 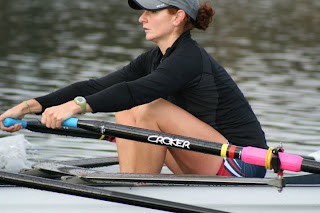 It's summer again. Championship racing is either just over or just beginning for you. And chances are, you will be hopping in a single at some point this summer, whether to race it, because there's an odd number of rowers at practice, or because your coach has told you it will be "good for you."

It's no secret that the single is the most technically difficult boat to row. While some might claim it’s the naturally-asymmetric pair—perhaps also because of the pair feature that the late coach Mario Katunarich explained as, "If something is wrong, it’s either you or the other guy…and it's usually the other guy”—the responsibility of moving the single rests entirely on you. Unlike an eight, where there is a coxswain calling "Ports—tap down at the finish!" or "Catches in!", in the single there is simply a constant internal monologue: "Row better—me!"

The women's team has spent most of this year sculling, in singles and larger boats, and we are currently training in singles for at least one practice every day. Although I've been sculling for more than ten years, this is the first year that I've really felt I can move a single well. Every day is still a learning process, though! I talked to some of the best scullers on our team, who are also rowing in singles right now, to see what insights they had on rowing the boat. Believe it or not, the best scullers in the world are thinking about the same things that people just learning to scull should be thinking about! Sometimes, it's funny to me how simple our sport is (although rowing the single is anything but simple!) 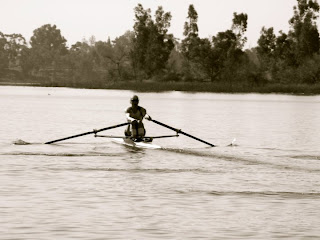 --The single only moves forward when your blades are in and your leg drive is connected to them. The single actually moves very slowly. For steady state, unlike an eight, you could actually keep up just by running along the shore. Therefore, it’s that much more important that you make sure you are connected before you drive, because an ineffective catch will not only add less speed, it will make the heavy boat even heavier and slower before your next catch. Stesha Carlé, who raced the 2x at the 2010 World Championships, says that one of her favorite drills to build a good leg drive is the reverse pic drill.

Sit comfortably at the catch with blades flat on the water, feeling your body weight down in your hips, with your core engaged so that your chest isn't supported only by your quads. Square your blades and bury them. Tap down with both hands and "bounce" in the water, fully submerging and fully releasing both blades, about one catch every second or two. By itself, this catch placement drill is great for feeling comfortable in the boat and confident at the catch.

To build off of the catch placement drill: after ten catches, use your last catch to connect and take a top-quarter stroke (use about 4-6 inches of your track, moving only your hands—to catch—and your legs to drive). Row top-quarter on the feather for ten, then lengthen to legs only for ten strokes. Take your time, making sure you can feel the blade submerge before you drive the legs. Add the body: place the catch, drive the legs, connect the torso. Don't jerk the finish to yank the blades out—tapping down lightly at the end of the connection will pop them out. Finally, add the arms. Don't worry about your boat speed; just try to feel the connection from the catch all the way to the finish in a smooth, aware motion. Try to carry that feeling over into the rest of your row. 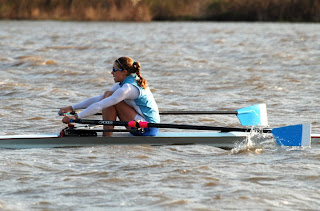 --The worst thing that can happen in the single is that you'll flip. Okay, actually, hitting something could be worse, but most of what holds us back from trying to make technical changes is the fear that we'll lose our grip on an oar, catch a crab, or do something else that will cause that long, slow, tip over, as the thought "Agghh! I knew this would happen!" flashes through our minds. All in all, though, flipping's not that bad. Imagine being a pole vaulter or a ski jumper and having your coach tell you that you need to make a technical change. At least we're not 25 or 80 feet in the air when we realize we're having an "Oops!" moment!

We all try to be comfortable in the single—the boat’s inherent instability is one of the reasons it’s so difficult to row well—and pause drills and square blade rowing are the means to achieving better comfort and a feeling of control. Multiple-time NSR1 single winner, Head of the Charles Champ Single winner, and U23 World Champion Gevvie Stone says that core awareness and square blade rowing help her stay balanced and level in the single. “Not only does square blade rowing help the balance, but it also helps me to be more horizontal on the drive and recovery,” said Stone. “It also helps me have a cleaner release and catch,” she added.

Besides square blade rowing, the same pause drills and catch placement drills you did with your high school, college or club program in sweep boats are very useful for improving in the single. Drills such as a double pause at the finish—tapped down, blades off the water—and then at the gunwhales—with knees relaxed, arms extended and body over—can help you find relaxation on the recovery and a confident catch. Stone focuses on engaging her core and feeling connected to the footplate through the entire stroke to keep rowing well, even through the final strokes of a race. 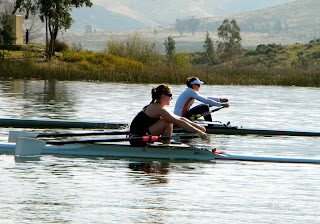 --Don't pull so hard! When you're trying to learn to scull or make technical changes in the single, one of the worst things you can do is to get competitive and try to go at a certain speed or beat someone else on the water. If it's a piece that your coach is timing or a race, don't hold back. But if it's a technical row, treat it like a yoga class—it's not about "beating" other people, but about focusing on yourself and improving the things you need to work on. If you're only focused on beating someone else, chances are you're not thinking about putting your blades in before you drive, or you're going to tense up in the boat because you're not working on the set.

"The single is reactive—you can't throw yourself around," says the stroke of the 2010 World Championships quad, Natalie Dell. "Everything has to be three times smoother and more patient than you think it needs to be." Taking deliberate and effective strokes will ingrain good habits, so when you do bump up the pressure, you'll be able to think about racing, not just whether or not you're going to catch a crab!

For those looking for a magic bullet: unfortunately, the best way to get better in the single is to...take more strokes in the single! But if you focus on these things, you will find yourself rowing better very quickly. Just remember to relax, breathe, and maybe even enjoy it!

**Photos courtesy of Katelin Snyder and USRowing**
Posted by Esther Lofgren at 11:21 AM

Wow, thank you for the tips and the drills! Can't wait to try them out on the water.

Great post. Really looking forward to the Dr. giving me the OK so I can get back to my 1x and some square blade practices!

PS - let me know if you ever need photos for an article.