Yesterday, we practiced twice in the morning--some good hard pieces and a circuit--and had the afternoon off. Since we're in lovely Essen, we decided to take a short jaunt to the downtown and look around before heading back for an early dinner and bedtime to get some pre-race resting in!

I thought I'd put up some photos to introduce the crews...unfortunately, intermittent launch availability has made it a bit tricky to get photos of us rowing, but here are some from our trip to downtown Essen!
We didn't get a chance to see too many of the sights, but we did get to check out the Essen Cathedral, which was lovely! It was rebuilt after it was bombed out in WWII, but Gothic cathedrals are always beautiful, even if they're mostly from 1958! We also managed to get a few rowing-related photos (credit to Mara Allen and Jen Kaido):

We have a few updates on our races. We were originally supposed to have heats Saturday and Sunday morning and finals in the afternoons of both days, as we were entered in two separate events. It now looks like we will have a straight final Saturday afternoon, and possibly also on Sunday. We are still not sure of our competition...our coaches have said that it will be some of the teams that were originally entered on the Entry List, and possibly some new ones. As of now, here are our race sheets: 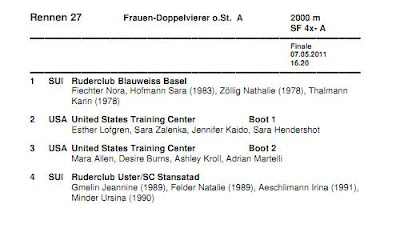 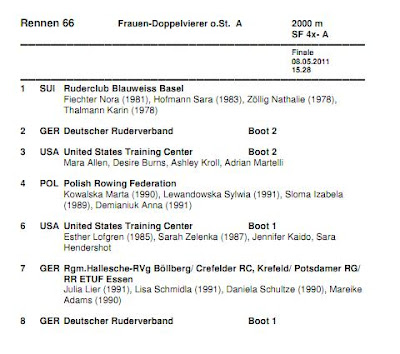 That's all the news thus far from Essen...more to come tomorrow!
Posted by Esther Lofgren at 2:14 PM