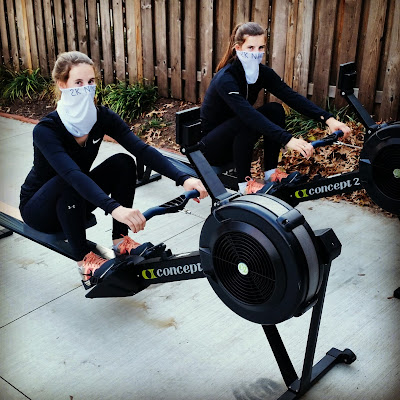 Thanksgiving is over and winter training has officially commenced. I sat down to write about strategies for breaking through the no-PR plateau (when you're training and racing and should be getting faster but for some reason your 2K - or 6K - isn't showing it). And then I realized: who better to hear this from than someone who's just done it in a big, game-changing way?

I worked with this athlete - aka 2K Ninja #1 - this summer (along with her counterpart, 2K Ninja #2). After taking big chunks of time off her 2K in her first year of rowing, it had been months and months since she'd PR'd. Unfortunately, her 2K was right in the "maybe" zone - not slow, but not quite recruitable. The Ninjas put in a lot of hard work and in just under 2 months, 2K Ninja #1 was on her way with a 2K PR that got her recruited to - and accepted at - her dream college.

Our training mixed some of the things she was already doing, like steady state and longer hard pieces, with strength training, super-focused steady state, and some really tough 2K prep workouts. But as she puts it, it was something else that made the difference.

Here's our Q & A on how she broke through the plateau.

Esther: Let's talk numbers. What did you start with, and where'd you end up?

E: What was different about the work we did compared to what you were doing before?

2KN: I didn't expect for us to do so much steady state work (I kind of expected the hard stuff!) At first I was skeptical that it would help me, but as I kept working I saw my steady state split drop and drop, and then my 2K split as well!

E: What gain are you most proud of from last summer?

2KN: Probably even more than my 2K score, I'm proud of how I was able to mentally tackle each erg and water workout you gave me. At the beginning of the program, you wrote down these workouts that seemed insurmountable. But we worked on not just the physical aspects of the rowing, but the mental aspects as well. By the end of the program, I was able to mentally tackle any workout you wrote down and take it one stroke at a time, and I was able to translate that into my mental state during my 2K.

E: Sounds like a lot of hard work! If you had it to do over again, would you?

2KN: Yeah, it was, but it was definitely worth it. I not only dropped a significant chunk of time off my 2K, but I became stronger as an all-around rower. You pushed me harder than I'd ever been pushed before, and I learned things I'll take with me for the rest of my rowing career. I'd do it again in a heartbeat!

E: Is there any part of rowing you like better now?

2KN: I definitely have a better appreciation for longer steady state pieces and how they help build endurance and speed. I also developed a weird liking towards the erg. At different points in the program we would be doing the same workout each week, and each week you would lower the splits I was supposed to hit. The first week I was all over the place and not even close. But by the last week I was able to hit them right on, even though the splits were significantly faster. Being able to measure that difference on the monitor really helped me see that my hard work was paying off.

E: What did your parents think of how you spent your summer vacation?

2KN: My parents were amazed by both the process and what it accomplished. They'd seen me over and over again only being able to take tenths of seconds off my 2K, and seen my frustration. I don't think they were prepared for such a big PR. I would come home every day pretty worn out, but I don't think they really understood  the work we were doing until they heard my score.

E: What would you tell someone who's thinking about putting in the work you did to get better at rowing and to get a better 2K?

2KN: Go for it! If you're willing to put in the work and you have a good plan, the changes you'll see in your erg score and in your rowing overall will astonish you. Be willing to give everything you have and to push for one split lower. Also, "impossible" workouts are almost never impossible. Take it one stroke at a time and trust that you can accomplish what you set your mind to.

So there you have it! Set your big goal, figure out your plan to get there, commit to the work it'll take and to building the toughness it will definitely take, and then get after it...one stroke at a time!

Posted by Esther Lofgren at 9:17 AM