I will be racing in the eight and representing the USA at the 2012 London Olympics!!!

I wouldn't have been able to do it without the support of my friends and family, and from the people who read this blog. Thank you all for encouraging me to follow my dreams. It has been a long seven years working towards this--being the last one cut from the eight in 2008, again in 2009, working through injuries in 2010 and 2011, and the ups and downs of selection this year. But all those obstacles have made making this team and getting to race this summer even better!

It is humbling to be a part of something as big as the Olympic Games, something that so many of my heroes--the ones I idolized as a kid, watching the Olympics on the tiny TV my mom had brought home from work for two weeks, and the ones I still tape into every training journal--have made into the ultimate celebration of humanity and sport. I am honored to be one of the athletes representing the USA, and I can't wait to get out there and race with my teammates and friends!

These last few weeks have also been really tough because of what didn't happen. Several women who have done incredibly well this quadrennium--four of them broke world records last month, for example--did not make the London squad, including my best friend on the team. We've trained together with the goal of making this team since 2008, when we were the last ones cut from selection for Beijing, and she has inspired me every day of the last four years. My friend and the rest of these women are amazing athletes and racers whether or not they are racing in London, and our team is as strong as it is because of what all of us have pushed each other to become. 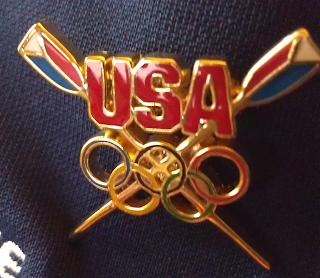 So--a lot of emotions, a lot of excitement, and now the hard work begins! We practiced yesterday morning wearing our Olympic unisuits (NBC was there filming–wow!) and racing down the course, it really sunk in for the first time that I am going to be racing and representing our country at the Olympic Games! I can't wait to see how much more speed and power we can find as a boat now that we are all together, and I can't even begin to imagine what the whole Olympic experience will be like!

Thank you again for believing in me and supporting me, and for helping me make the Olympic team!